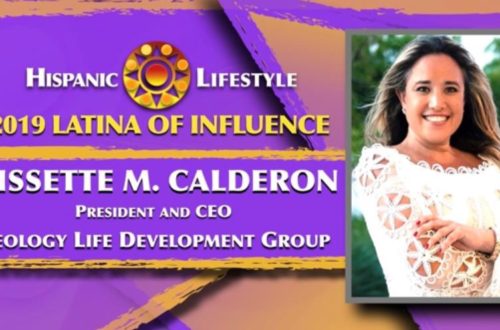 Hispanic Lifestyle is pleased to recognize Lissette M. Calderon is the President and CEO of Neology Life Development Group, a firm that focuses on redefining urban neighborhoods in South Florida through lifestyle-driven residential and commercial development as a 2019 Latina of Influence. Ms. Calderon along with our entire list of 2019 Latinas of Influence are invited to participate in Latina Conference 2019 taking place April 10 and 11, 2019 in Ontario, California. Neology Life’s latest project is Pier 19 Residences & Marina, a 199-unit luxury residential rental community that offers direct access to the Miami River, a private marina, upscale amenities (pool deck with outdoor living rooms, movie theater, state-of-the-art fitness center, dog park and more) and creative programming for residents.

Calderon’s rise to become one of Miami’s most prominent figures in a field still dominated by men began in her childhood. Her parents, who emigrated from Cuba in the 1960s, shared a passion for real estate, and her father developed a number of small projects. After graduating with honors from the Wharton School of Business, Calderon started her career as an investment banker in New York City. There, she fell in love with SoHo’s loft-style living, a niche that she felt wasn’t being addressed in Miami.

Returning to Miami, Calderon apprenticed at Terremark and The Related Group of Florida, where she worked as a senior project manager in the 1990s. But her aim was always to start her own company. In 2000, Calderon left Related Group to launch her own brand, NEO.
Calderon broke out on her own to fulfill her dream of bringing young, hip loft lifting to Miami and she felt that the Miami River, with its industrial personality and waterfront backdrop, was a perfect place-making location. She broke ground on her first River project, NeoLofts in 2002 (a time when residential living along the river was virtually unheard of) and followed up with Neo Vertika and Wind by Neo shortly thereafter. Calderon’s visionary projects set in motion the emergence of the Miami River as a highly sought-after residential district, and now the launch of Pier 19 brings her full circle.

After developing her first Neo projects, Calderon, returned to the Related Group in 2014 to lead its International and Strategic Projects Divisions, making her the company’s first female divisional president. With Neology Life, Calderon is once again blazing her own trail.

Calderon is the first female since Julia Tuttle, the Mother of Miami, to see the true potential in the Miami River and make her mark on the area. She is credited with transforming the Miami River skyline and bringing loft style living to Miami. With nearly 1,500 units completed representing over half a billion dollars, no other developer, male or female, has built more units on the Miami River than Lissette and her Neology brand.

Calderon is involved in numerous community organizations, including Amigos for Kids, a nonprofit organization serving the needs of South Florida’s abused, abandoned and neglected children. Calderon has served on the Board of Directors for the past 14 years and currently sits on the organization’s Executive Committee. She also sits on the Board of the Sundari Foundation, Inc. a non-profit organization dedicated to improving the lives of poor, disadvantaged and homeless women, youth and children. Most recently, Calderon was appointed to The University of Miami’s Master of Real Estate Development + Urbanism Advisory Board.